Trending
ICYMI: 10 SIGNS You Can Trust God Being a Mom. Unmasked: Lord, Will I Ever Be a Mommy?! I’m Scared to Start My Dream Self Vows with Dr. Michelle R. Hannah
HER THOUGHTSSTORIES BY HER

Stories By Her: Love in Season

I was late to fourth period often. I didn’t care much. My GPA was fine, better than fine, and in just a few short months, I could kiss my high school career goodbye. His fourth period classroom was right next to my locker and instead of getting books and preparing for the next class, I spent it studying his lips. And no, we weren’t talking. What else do 17-year-olds do, anyway?

My father was concerned after seeing my report card and called the school, taking note that one class, that was right in the middle of the day, had an unusual amount of tardies than the others.

“Oh, that’s because that class is all the way on the other end of the building. It takes me a while to get there.”

My dad wasn’t trying to be mean. He just couldn’t figure out why an otherwise A student was getting a C in a class because of being late. But who cared about grades when you could have regular make out sessions in front of your other hormonal peers every day?

I was like a kid at Christmas and he was my winter. Christmas came every day at fourth period and like a child, I enthusiastically enjoyed my gift. But like Christmas it left as quickly as it came and I was left with blistering cold, early darkness, and gloom:

Until I finally stopped coming into the frost, keeping warm inside until the next season.

The dominance of hip hop with the cavalier attitude of jazz played its lo-fi tunes in the background of the crowded pub. It was his idea after our time at the park got cut short when it started raining. That was spring’s specialty, always there to take a rainy day and turn it into a day of discovery and growth and potential.

Lucky for us, we got the window seats. The ones with the lounge chairs. Glancing out the window, I wasn’t even angry that it was raining, as the spring so often brought with this time of year.

“I love this music.” I closed my eyes and just thought of the rain outside. So beautiful. So promising.

“I want to try an instrument. What do you think?”

“Have you ever played an instrument before?” he chuckled.

“Would you come watch me play?” I gave him the flirty smile he liked, that showed just a little bit of teeth.

“Every time…” He followed with, “unless you suck.”

He never saw me play piano. I quit after my first two lessons. I did suck. And I didn’t enjoy it. Instead, my instructor recommended I try a different instrument that was different on the hands. That day, I fell in love with the violin instead.

I watched him spark up the grill from the lounge chair I sat in, enjoying my view alternating between him and the lake.

“What is that?” I asked, eyeing the food he’d brought out.

“No! No barbecue of mine will have meatless meat.”

The way the corner of his mouth lifted for a smile, paired with the slant in his eyes, always made me return the look.

“Just give it a try. It tastes good. And It’ll be good for you.”

I hugged him from behind and kissed his cheek.

“Fine…but if I hate it, you’re going to the store to buy me the real stuff.”

He didn’t go back to the store. Instead, I had three of those veggie burgers, while we watched the fireworks that night. He was my fun in the sun and we spent that time at beaches, in swimsuits, going shopping, trying new things, and relaxing in the shade.

We left the lake house about a month later. That’s when the temperament began to grow cool. Not winter cold, just not hot anymore. My time with Summer was fading. There was nothing wrong. It just eventually fizzled out and before I knew it, it was too cold to go to the beach or do anything else. And the sun wouldn’t shine on us even if we tried.

I held hands with fall on the back porch of my new townhome, the time when vegetation becomes mature. I lived right near farmland, and had a direct view of corn and green vegetables and pumpkins, in full bloom after going through their seasons of perfection. The weather was chilly, but the sun shone abnormally bright. I squinted my eyes to shield them from the reflection, while trying to hide my shivering from the cold so he wouldn’t recommend we go inside.

I moved about a year prior and lived two hours away from my dad. I hadn’t seen him in about a month and the thought of seeing him now made me quiver even more. The momentary gust of wind forced the tear out my eye and down my cheek. I quickly wiped it away.

“I think you should go anyway. I know it’ll be hard. I lost my grandmother to cancer. But you’ll be glad you got to see him. Plus, I think he’d really like to see you.”

“I don’t want that to be the only thing I remember whenever I think about him.”

I blinked away the water continuing to form in my eyes.

“It won’t be. You’ll remember all the good times you had together.”

“I can come with you if you want.”

I looked down at our interlocked hands.

“We don’t have to move until you want to.”

He came with me that day to the hospital. Dad had gotten better but only for a moment. The season had changed again by the time of his funeral. It was a weird time. Where it was not quite one season, but not quite the next one either. That time of year where all the seasons kind of mix together. I liked it though. For a while, I hoped it would stay that way. And if it did, I’d grab a veggie burger and sit on my back porch.

Or plan for Christmas.

Or practice my violin.

I wouldn’t anticipate the next season. Instead, I’d enjoy the in-between one I was in and be happy doing it with me.

Chelsea likes to live in color and turn those experiences into black and white words. She may seem quiet when you first meet her, but her brain is always moving with creative thoughts. She has been creating stories ever since she was a child to bring others into an imaginative world they can relate to. When she's not writing, she loves to read, travel, play video games, draw, learn music, and spend time with the special people in her life. 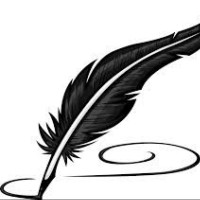