Trending
ICYMI: 10 SIGNS You Can Trust God Being a Mom. Unmasked: Lord, Will I Ever Be a Mommy?! I’m Scared to Start My Dream Self Vows with Dr. Michelle R. Hannah
HEALTH & WELLNESSHER STORY

We’re continuing to focus on mental health stories, but that doesn’t always include issues regarding the mind. The body is also affected. This post features actress Lana Condor, from Netflix’s To All The Boys film series – she shares how she’s been living with body dysmorphia and when she realized it.

You don’t have to struggle alone. A lot of people want to ’cause they don’t wanna be an inconvenience to others. And I definitely think that was the case for me. But if you open up, chances are someone can relate to you and give you advice and tell you all the reasons you are incredibly beautiful, whether or not you think so yourself.

When I did ballet for like all my life, I would just see myself in mirrors constantly. So I think that was my most unhealthy. And I think honestly when I stopped doing ballet and doing classes, I felt like that was the beginning of where I could start working on the body dysmorphia. It’s just when you see yourself in mirrors constantly, and you’re like wearing nothing, you can really just nitpick yourself to death, which is so unhealthy.

But I think what I stopped dancing was the beginning of like, okay, I definitely need to heal, ’cause the way that I thought about myself when I was dancing was not healthy. I’m not in a place where I can say like, oh yeah, it’s over. You know, I think as every day, like healing every day and reminding, like, being so gentle with yourself I think you have to work on it every… At least I have to work on it every single day.

I do think working out in a healthy way has helped a lot because it makes me feel good and makes me feel stronger. But I used to work out constantly. So now I’m trying to do things that I just genuinely love and not in an overt, like a burnout way. Anthony and I, my boyfriend, we’re gonna start doing like dance, like Zumba, it feels joyful to me.

So I think that that’s the main thing that’s been helping us like doing classes that are like fun or my trainer is great for example, he makes my training fun and doesn’t push me into a place of burnout, which I think is important because once you’re at burnout, then it’s all over, you know like, oh man, every bad thing that I say takes up so much more space in my head than it should so.

It’s been such alike every day is up and…you know, it’s a very much a whirlwind like when I talked to my friends about this and everyone a lot of people just say the same thing but I think that I have really had to like double down in the mental health area of it because I think just the unknowing of everything can get you if you don’t really focus on your mental health, can get you really kinda jazzed up.

So it’s been like, I’ve actively had to make sure that I’m taking care of myself every day because there are days definitely that I’m like just… I just lay in bed and won’t do anything and then I realized like, I need to do something like meditate or read or whatnot. And then physically I was just talking about this that, right when the pandemic hit we all just stopped working.

I know for so many of us we were just work, work, work constantly. So you didn’t, at least for me, I didn’t have time to really sit and like with myself. And as soon as the pandemic hit like I just stopped working. Then I feel like I just was like, well, the world is over and so I just truly was like I’ll be a couch potato forever. And then it was only to like recently where I started like, no, the world will keep going and so now I’m like working out and doing all this stuff, but it’s definitely not.

I’m like not gonna sit here and say, yeah, it’s been like, awesome my self-care has been great because I don’t know if it truly has to like, you know the past like maybe three months where I’m like, okay the world isn’t gonna end. Now where I feel like we’re gonna be… I feel like there’s hope, but who knows? I, for myself it’s like sometimes when you’re feeling very low you just kind of binge and that’s how it is in the moment. Like, I know I’ve talked about it publicly, but it’s like something I think that feels so private to me. And then I just like had this moment, this particularly this year, I was like,not alone in this, you know.

This year has given us space, at least myself I’ll always speak for myself has given me the space to see what really truly matters like at the end of the day. I’m so like, I love my dog, you know. And I know now the times that I’ve abandoned myself and I don’t wanna ever feel like that again. I don’t feel the need to be like, I have to say yes to every single thing because mentally that’s not healthy. My ultimate self-care for me is being with my pup. Well, it’s not a puppy anymore but I’ll call her a puppy forever.

Being with my dog, Emmy I’m reading a thriller and not talking to anyone. I think there’s like another thing I’ve realized this year is I think I’m very much an introvert more than I ever thought. ’cause I thought to myself like, I’m an introvert that I charge as an introvert and then I expel extroverted energy. But no, I think I’m like truly, like, that’s why I say like I don’t mind being alone and not talking to anyone. So that’s another thing I’ve learned this year.

And I think that’s okay but as a performer, you have to expel energy and be brighter or bigger than I think you are in real life. ’cause I remember talking to my boyfriend being like, Oh my God, I am exhausted after work like a year ago or whatever. I’m so exhausted after work. And I think it’s because I’m just like I feel like I’m putting out so much energy and like trying to be so bright and all these things and like trying to entertain people when I’m not in front of the camera and all these different things. And I’m so tired, but that’s because I was like, I think you know, insecure and who I am just as Lana.

So that’s something that, again, coming back into like shooting and working now, it’s like, Hmm, I know the way I acted onset before COVID but it feels different now. And I don’t know if it’s good or bad, but I feel great. So I’m just gonna roll with it. People are speaking their truth during the pandemic. I honestly couldn’t tell you why I decided to like, be more outspoken. I think, I mean, I would like to. My little cousins are dealing with the same things. I want them to know that they’re not alone. Like if you’re 12 right now growing upright.

As a kid, you just like, you look up to like I don’t TikTok but I will, might, maybe TikTok but like all these people look so perfect. I’m 23 and I’m influenced by it. And I’m like, oh my God like, all these models and everyone looks so great what do I do? But we have to do a better job at being kind to ourselves for sure. I’ve seen people that I look up to share their mental health journey particularly recently. And that has helped me feel stronger about talking about where I can feel more confident, but it’s a journey.

That’s why they call it a journey. 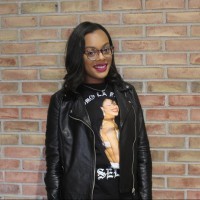